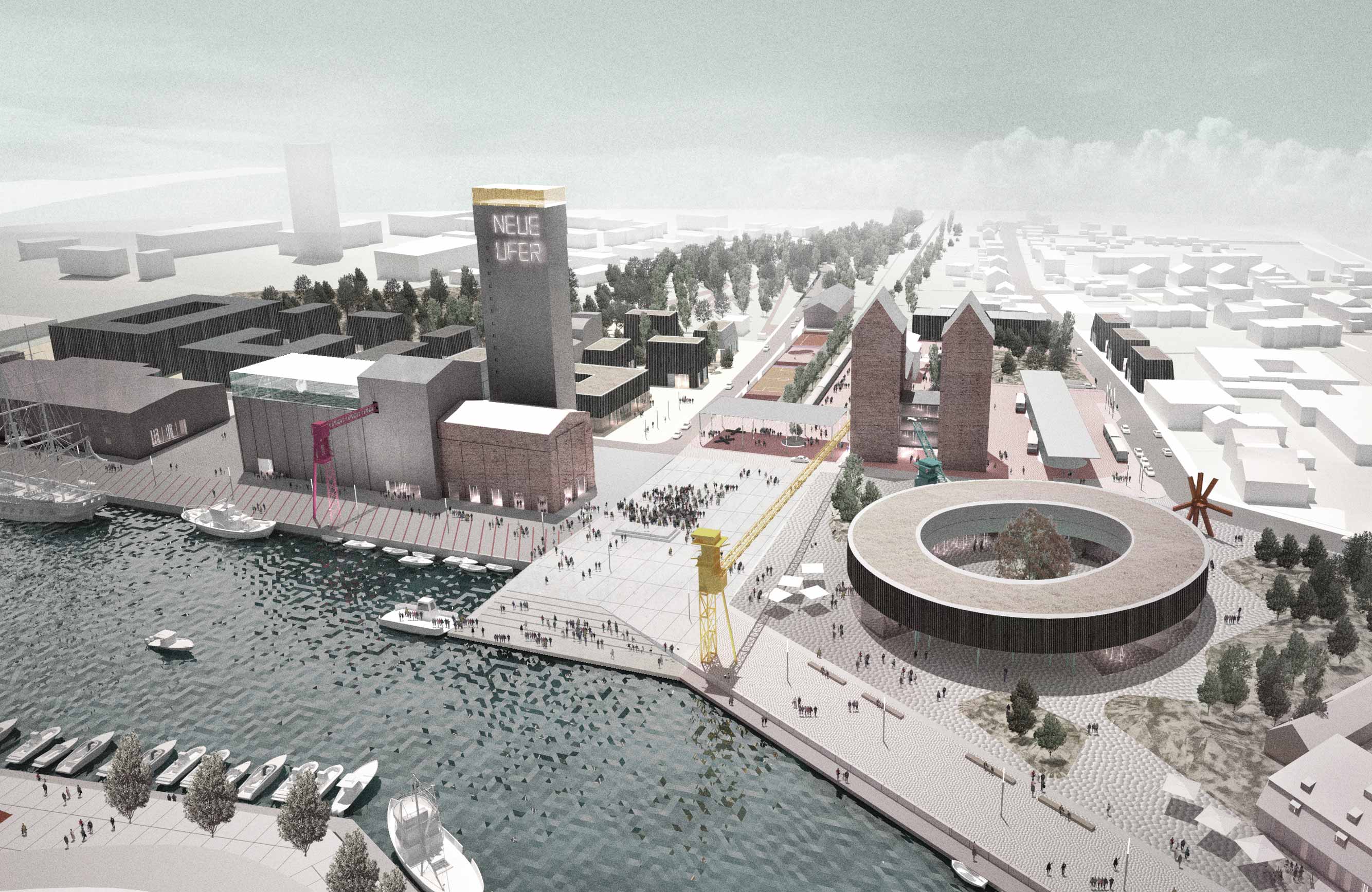 The “Neue Ufer” model describes the urban and structural reorganization of the port area and the surrounding areas around the train station in Neustadt in Holstein. The Neue Ufer is divided into three sub-districts, each of which has its own identity and focus of use. At the same time they are part of a common structural and spatial development and deeply connected with one another and with the existing urban structure. The center of the new development is the actual harbor district, which is characterized by its distinctive warehouses and storage towers. The typical character is preserved through the extensive preservation and the careful renovation of these historical buildings, while the areas surrounding them are to become a new meeting point for locals and visitors, mainly through the redesign. A multifunctional building with an elliptical floor plan serves as a link for the different quarters that come together in a central square. The rotunda takes up the typology of the green inner courtyard of the Heiliggeist-Hospital and reinterprets it, while at the same time different uses are combined and thus contribute to the vitalization of the harbor area. The large-scale warehouses will be preserved in their previous form and use and integrated into the overall concept. They can still accommodate permanent facilities such as offices, studios, workshops or temporary events such as covered markets, street food offers or exhibitions. The unused granaries should be put to a new use, which takes into account the future viability of Neustadt and ideally should open up new economic opportunities for the city beyond tourism. The storage facilities will be converted into a “Neue Ufer Farm-LAB” and thus become a pilot and demonstration project for integrated and sustainable urban food production. Aquaculture, hydroponics and cultivation of mushrooms can be operated in the unused silo systems as part of the pilot project. In addition, companies from the areas of sales, processing or refinement of food can settle there, e.g. a fish smokehouse, food market, restaurant etc. The “Neue Ufer Farm LAB” could thus become a regional partner for institutions from industry and science and a new development impetus for innovation and sustainability to rethink outdated industries. In the area of the harbor edge and the historical buildings, the industrial harbor character and maritime charm should be preserved as far as possible and integrated into the overall concept. In addition to the storage facilities, parts of the track systems, cranes and conveyor systems should also be an integral part of the design of the open space. 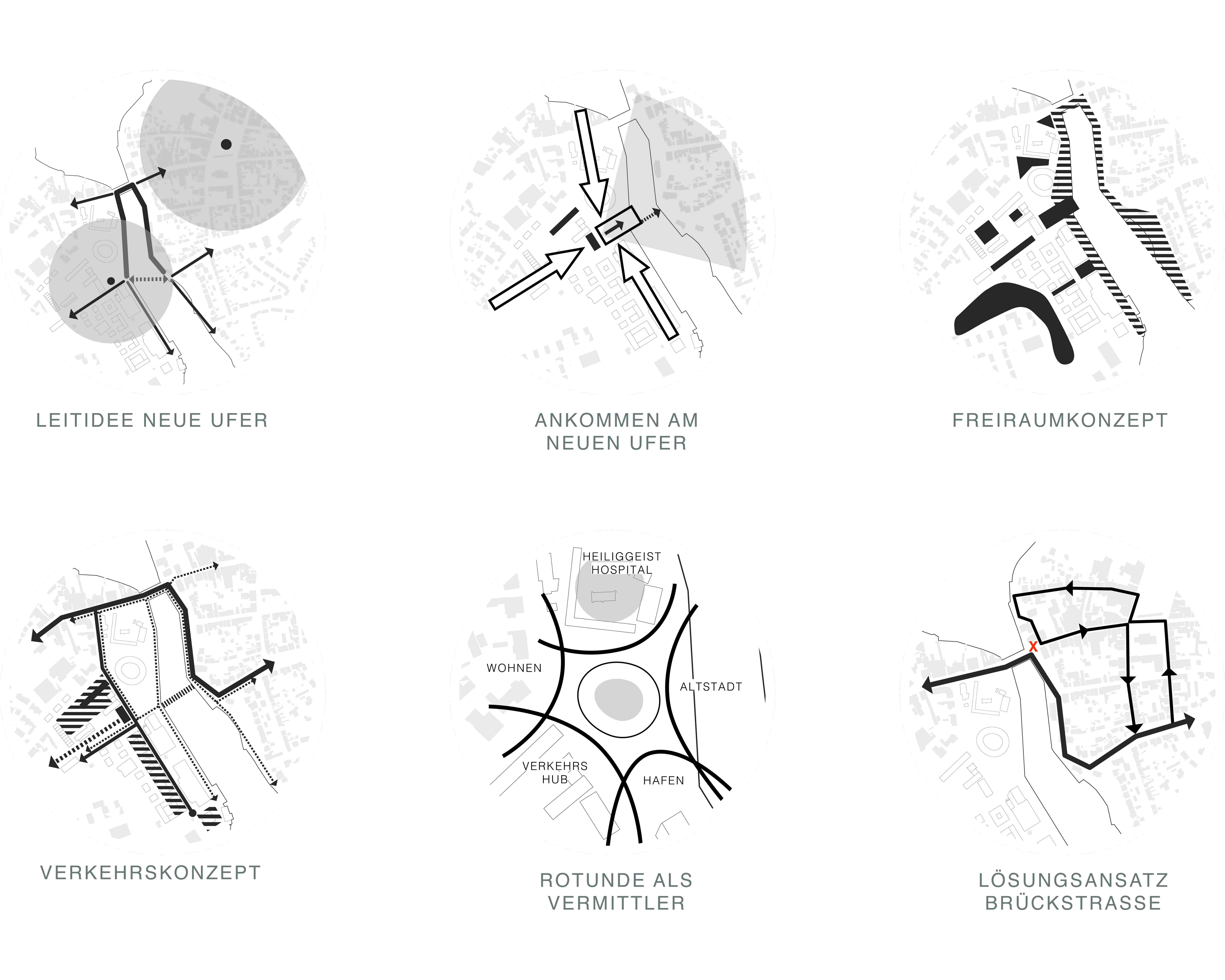 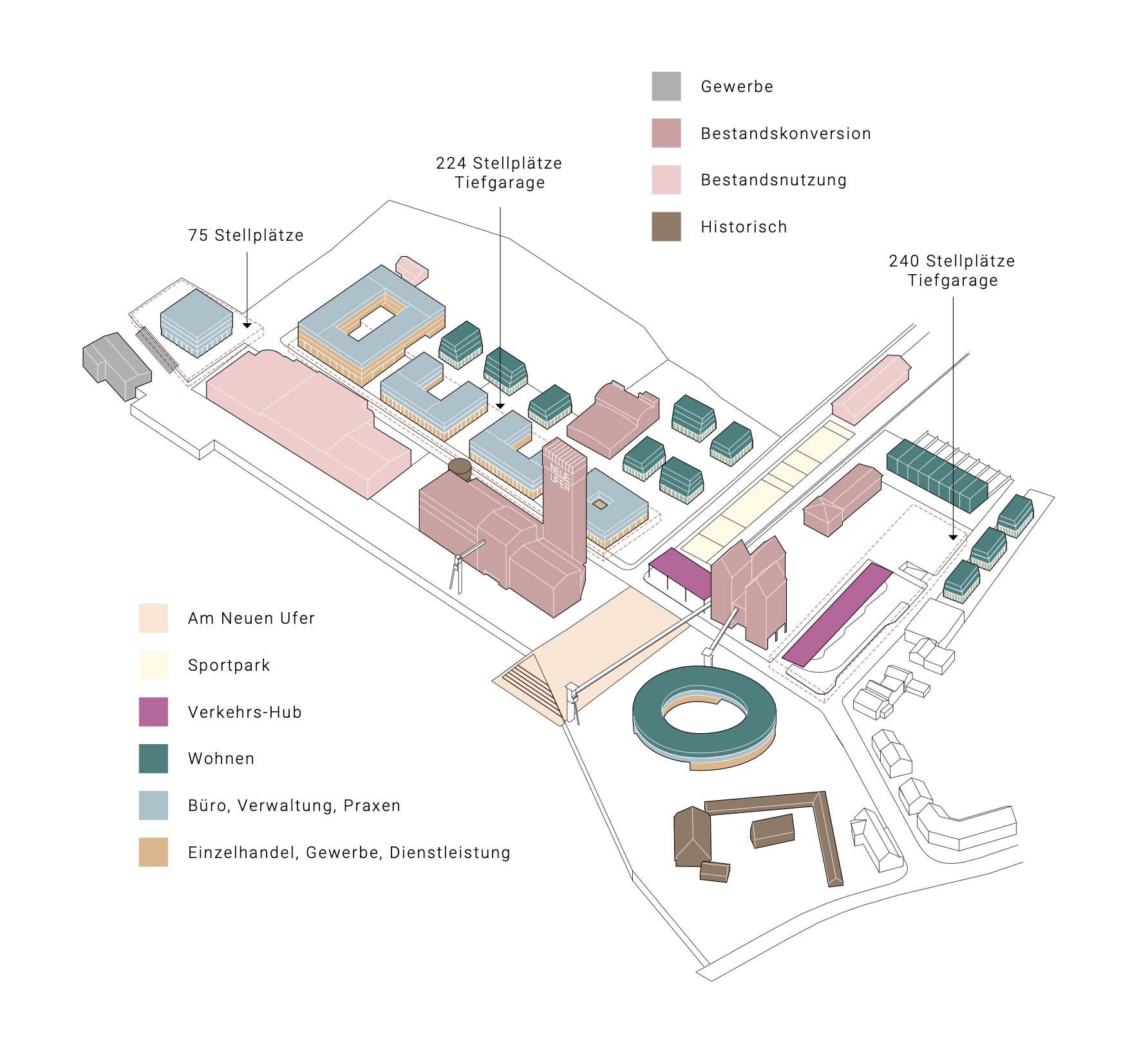 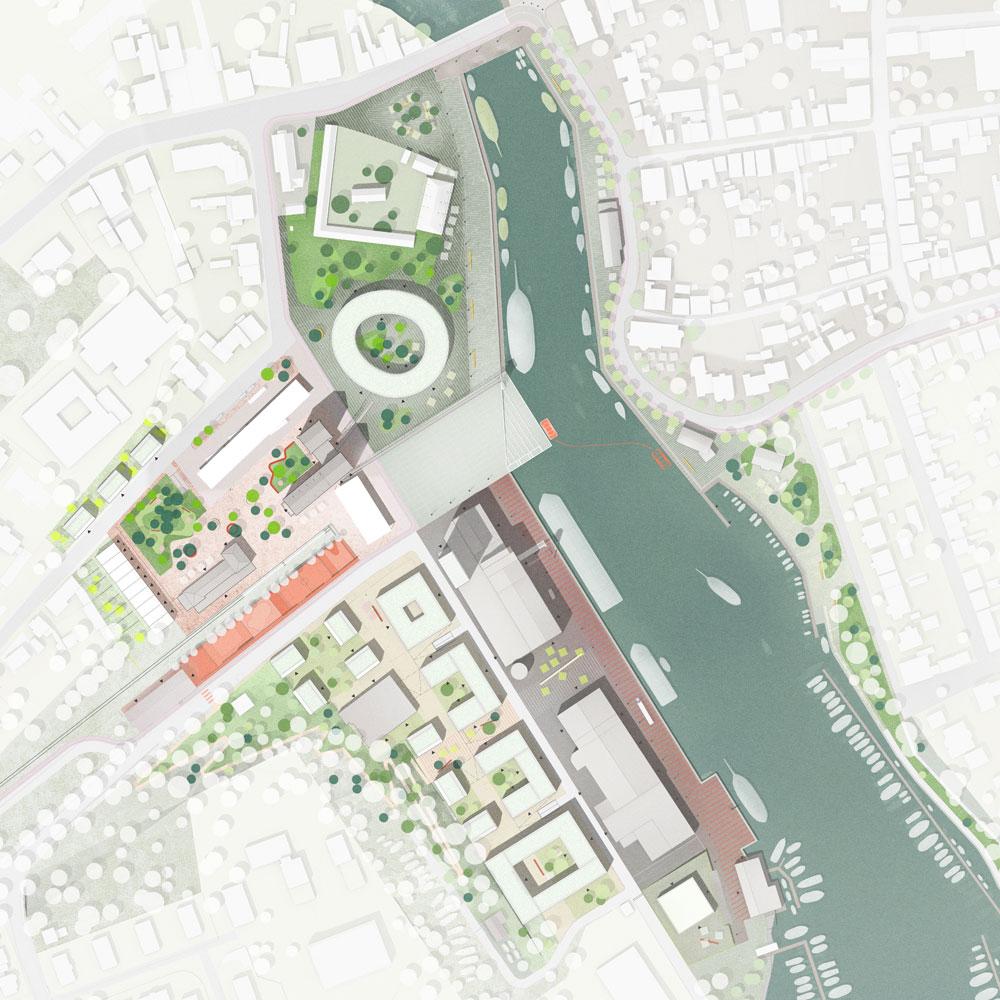 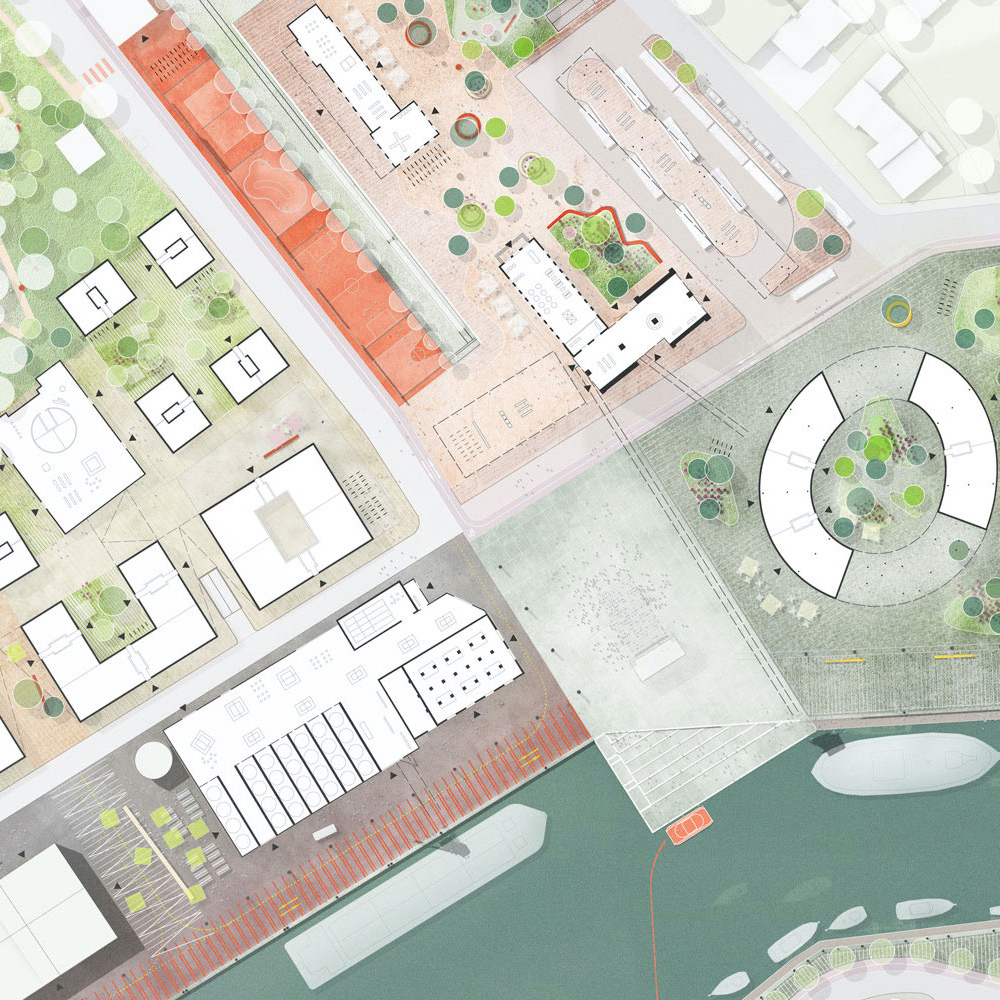 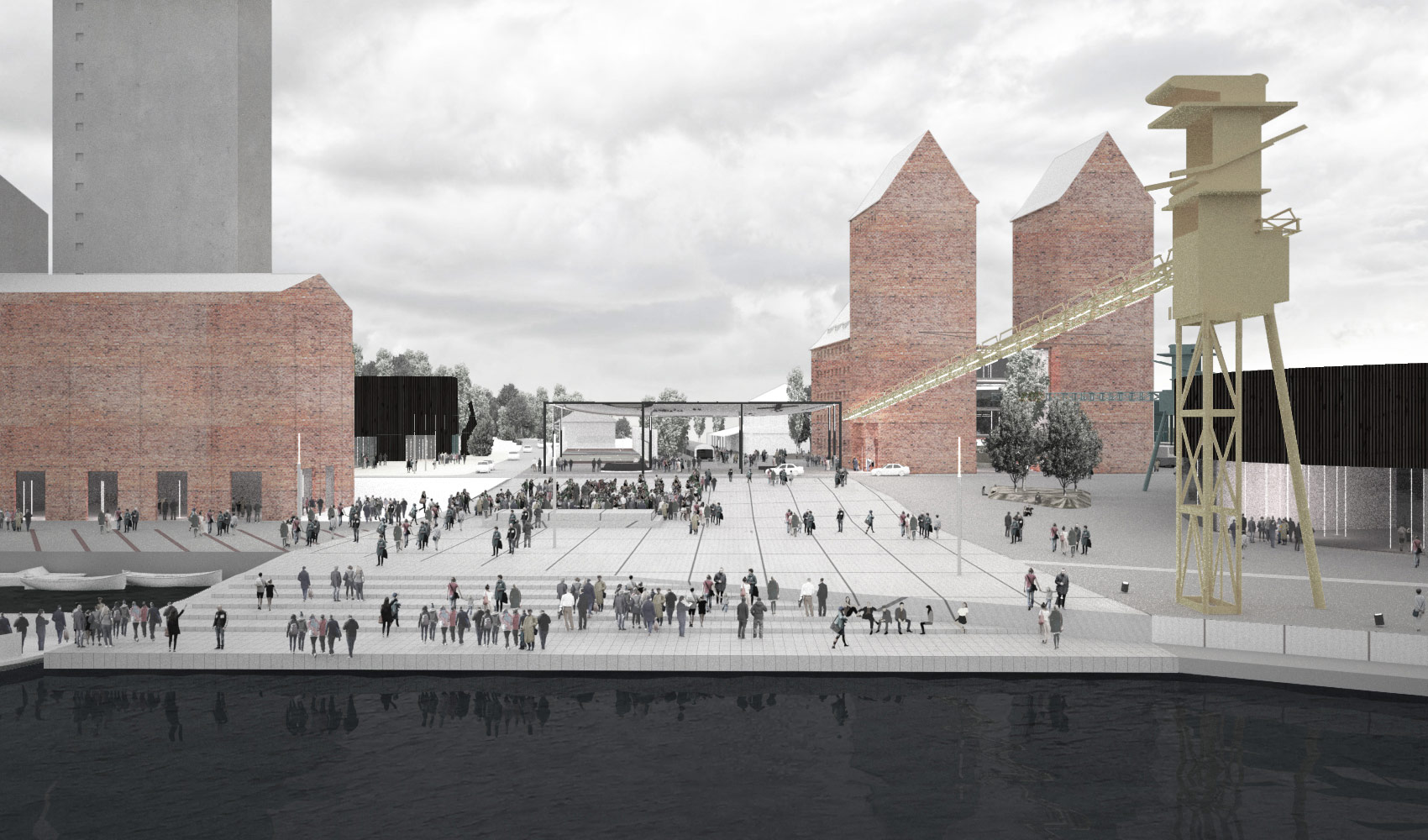 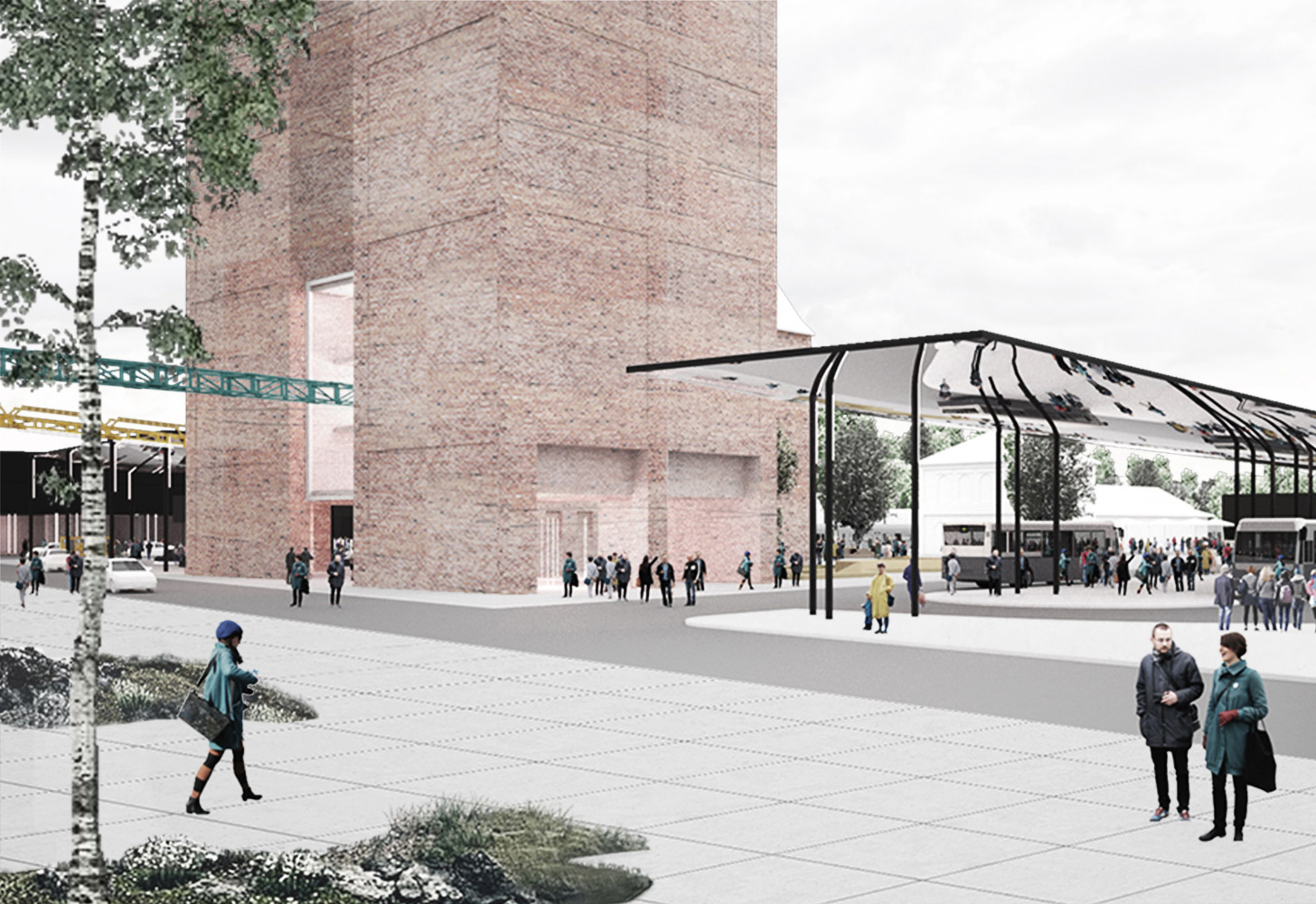 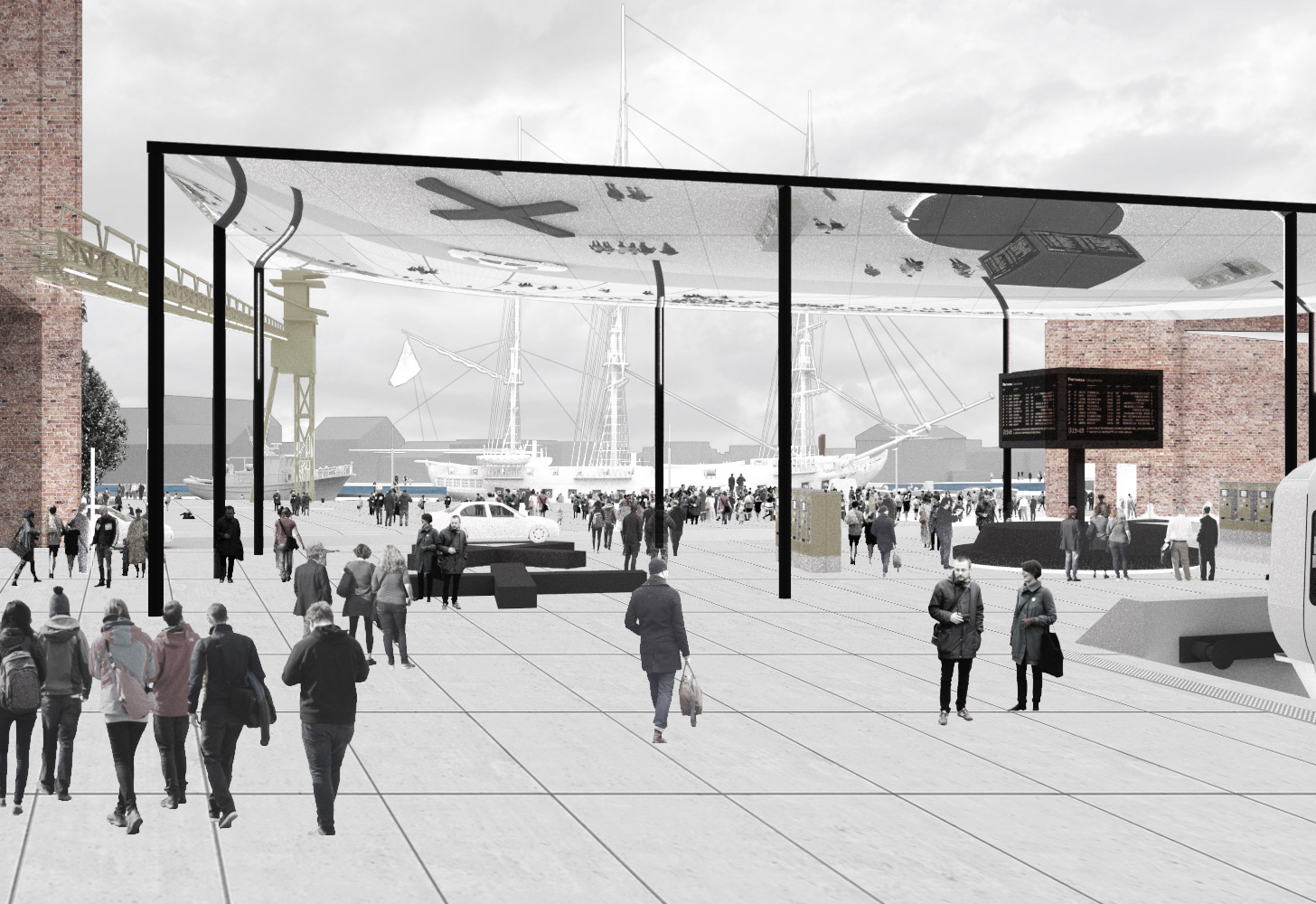 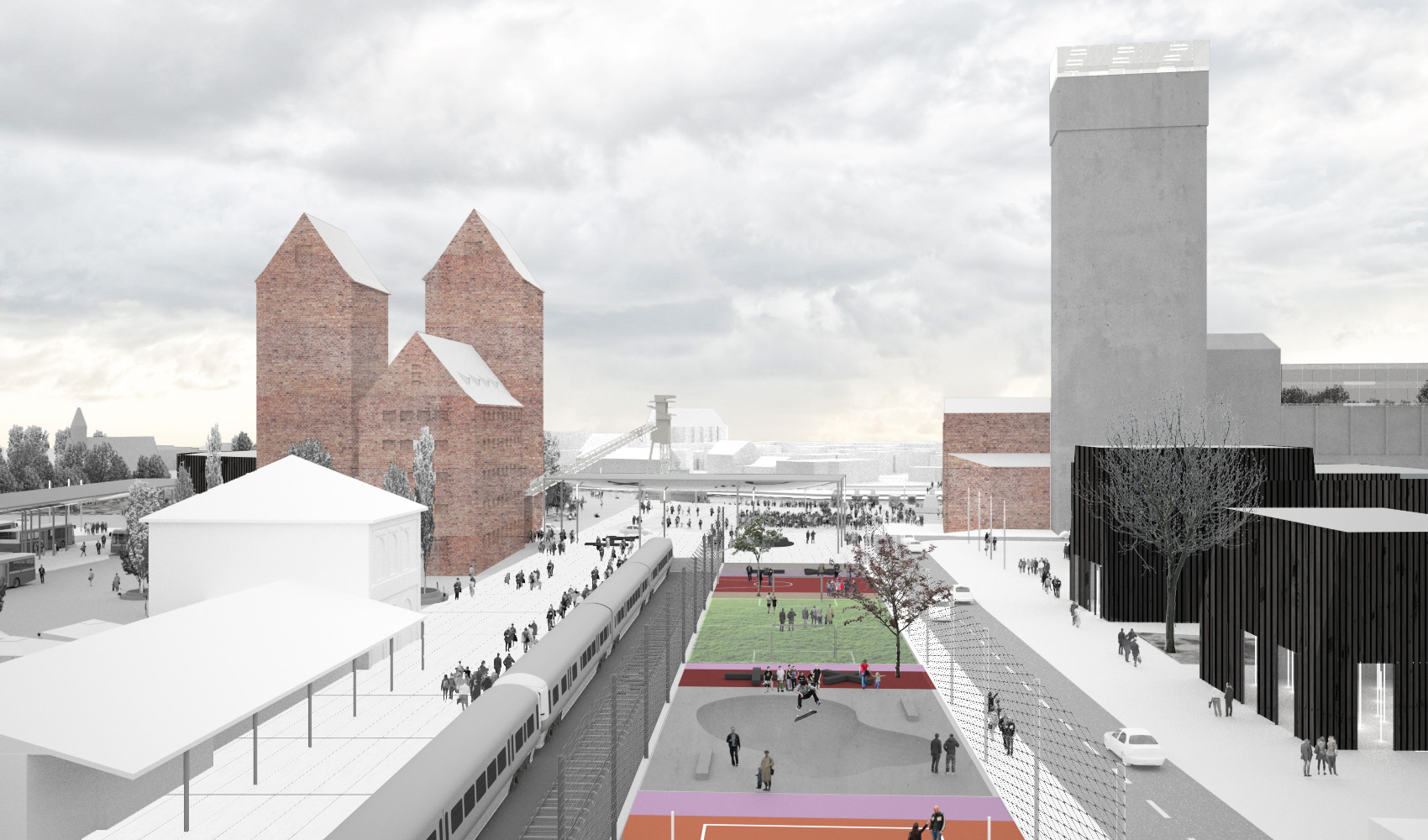 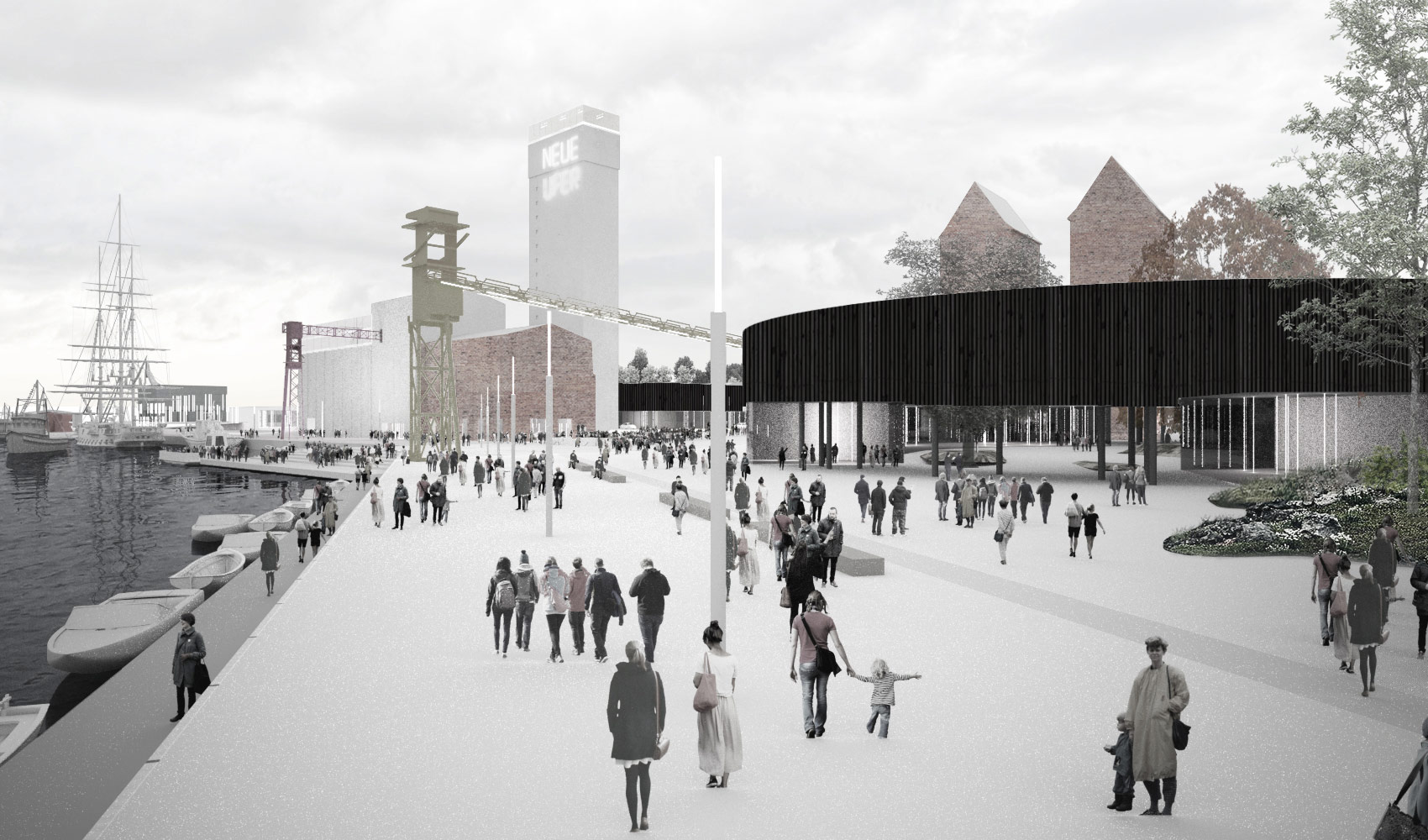 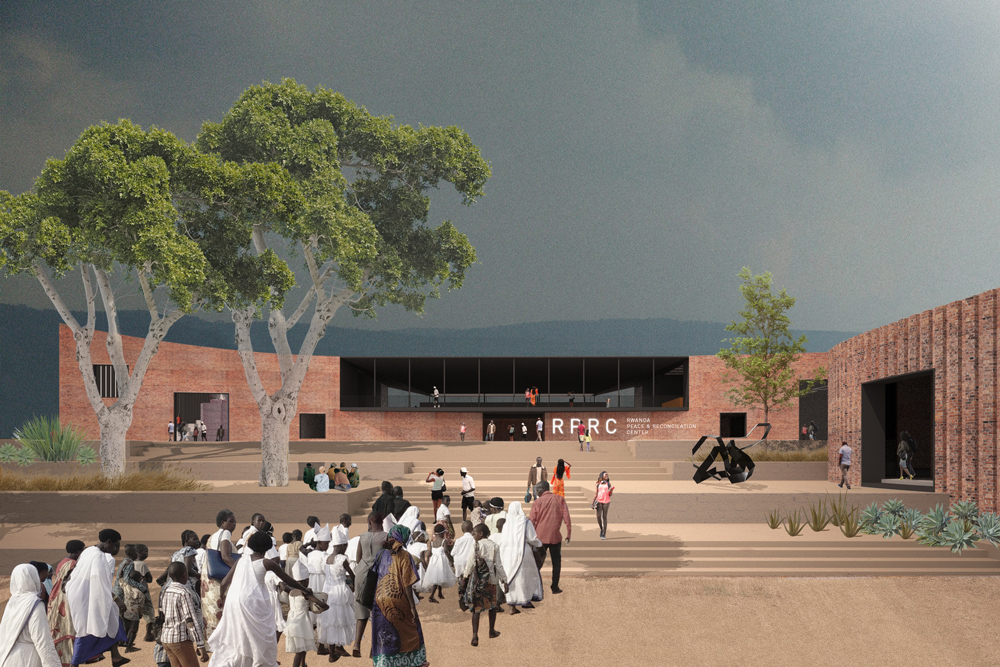 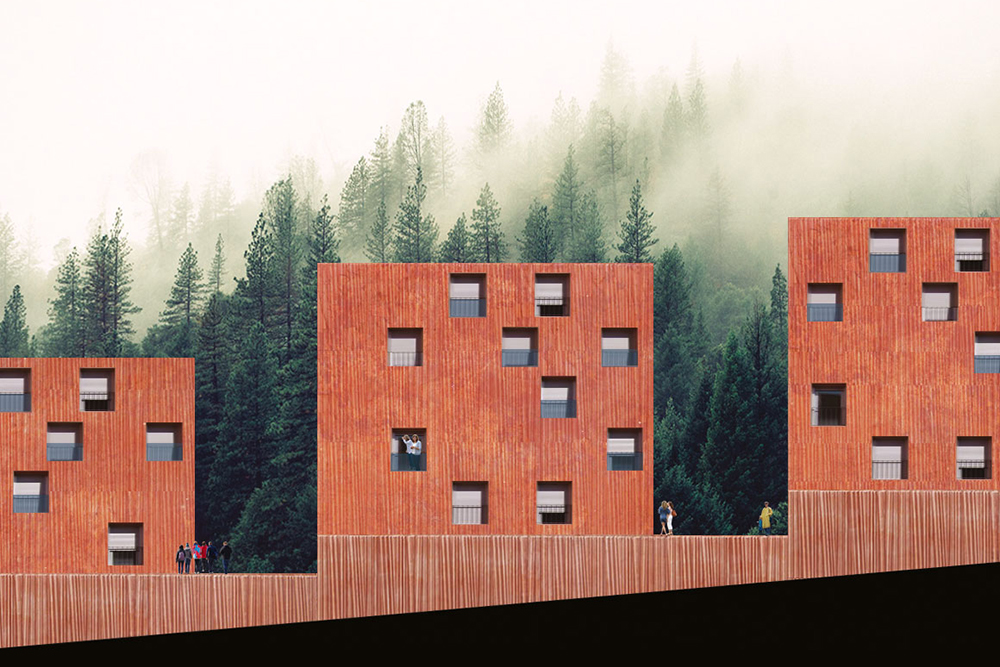 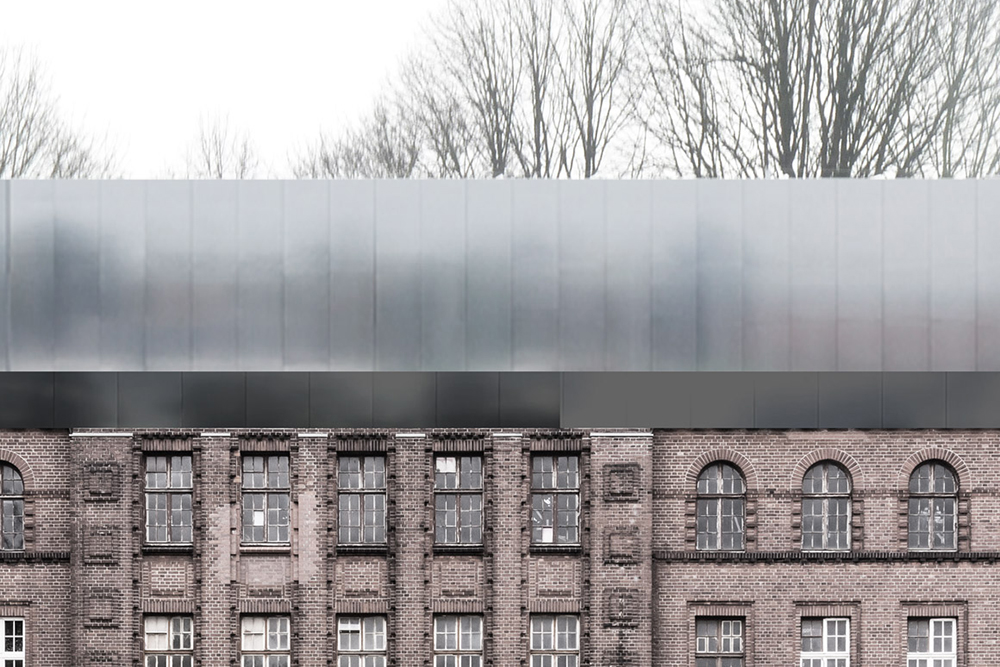 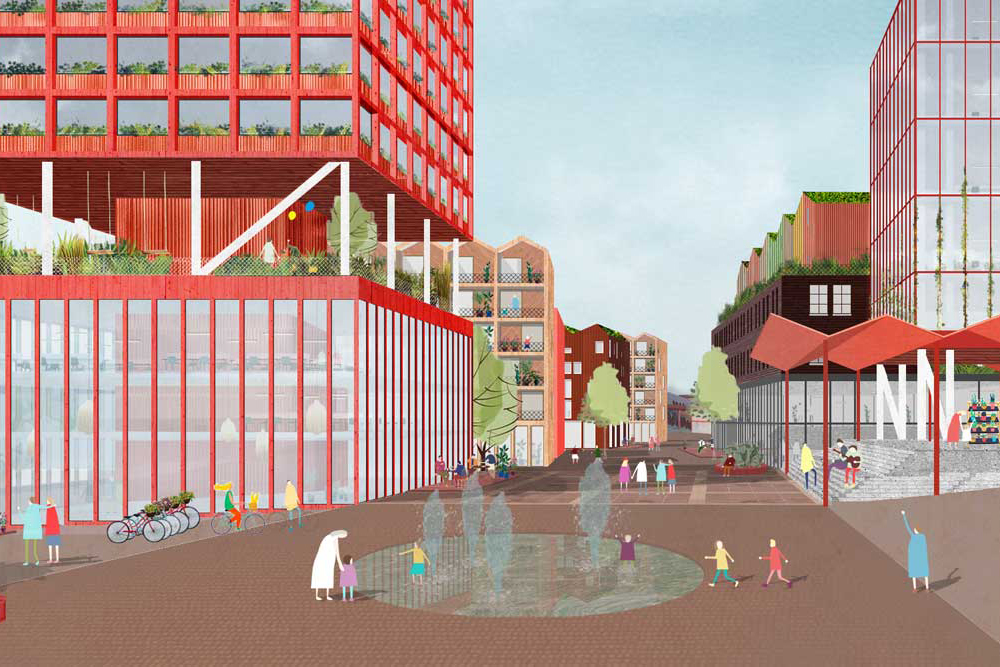